Not only was Charles Waddell Chesnutt one of Cleveland’s best known African-American leaders, he was featured on a U.S. Postal System stamp in 2008!

Chesnutt was an African-American author, political activist and lawyer. His writings focused mostly on how African-Americans were treated in post-Civil War southern society and how they identified themselves. Of interest to our Court readers, Chesnutt also established a successful court reporting business in Cuyahoga County in the early 20th century.

Chesnutt was born in Cleveland to Andrew and Ann Maria Chesnutt, both "free persons of color" who were originally from Fayetteville, North Carolina. His paternal grandfather was a white slaveholder, and while Chesnutt had skin light enough that he could have been identified as white, he never chose to do so.

As a child, the Chesnutt family returned to Fayetteville so his parents could open a grocery store. It did not do well, but Charles found a calling in academics. Charles was both a pupil and a teacher at the Howard School when he was 14.  Chesnutt eventually became assistant principal of the normal school in Fayetteville, which eventually became Fayetteville State University.

Chesnutt married and eventually moved his family back to Cleveland in 1887 where he started to write stories that got printed in magazines. In 1887, "The Goophered Grapevine" was the first work by an African American to be published by The Atlantic Monthly. The magazine encouraged his writing, and that led to a 20-year relationship with them.

His first book, a collection of short stories entitled The Conjure Woman, was printed in 1899. Chesnutt’s writing featured black characters that were more complex than similar stories of the era. He wrote about the issues of mixed race, "passing as white", illegitimacy, racial identities, and social place.

Two of his books were adapted as silent films in 1926 and 1927 by the African-American director and producer Oscar Micheaux.

Starting in 1901, Chesnutt turned more energies to his court reporting business and, increasingly, to social and political activism. Beginning in 1910, he served on the General Committee of the newly founded National Association for the Advancement of Colored People (NAACP). Working with W. E. B. Du Bois and Booker T. Washington, he became one of the early 20th century's most prominent activists and commentators.

In 1917, Chesnutt protested showings in Ohio of the controversial film Birth of a Nation, which the NAACP officially protested at venues across the nation.

Following the Civil Rights Movement during the 20th century, interest in his writings expanded. Several of Chesnutt’s books were published in new editions, and he received formal recognition. 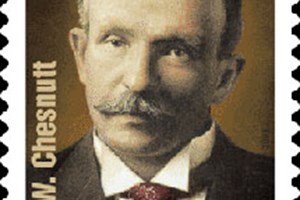