Judge Lillian W. Burke made history in January of 1969 when she took a phone call from Governor James Rhodes. The governor was calling to ask if she'd accept an appointment to be a Judge in the Cleveland Municipal Court. Burke, then a hearing officer for the Ohio Industrial Commission, said "yes" and was sworn-in ten days later as the first black woman Judge in Ohio.

Judge Burke was born in Thomaston, Georgia, in 1915 and her family moved to Duquesne, Pennsylvania, when she was young. In the 1940s, Judge Burke attended Ohio State University and then taught in the Cleveland Public Schools while she got her law degree from the Cleveland Marshall College of Law.

After a stint in Columbus as an assistant attorney general, Burke was hired as the first black woman to be a hearing officer for the Ohio Industrial Commission. Then came the call from Governor Rhodes, a fellow Republican. Judge Burke remained on the Cleveland Municipal Court Bench until her retirement in 1987.

"She was a very, very sophisticated lady," said Judge Connally in an interview with Cuyahoga County Common Pleas Court (see below). "She was always very proper. A very meticulous lady."

Shortly before her death, Judge Connally organized a get-together of about 25 past and present black judges at Burke's home, where they honored her with a county proclamation recognizing her for a legacy of black female judges. They included Ohio Supreme Court Justice Yvette McGee Brown -- the first black woman to serve on the Ohio Supreme Court -- and Judge Benita Pearson -- the first black woman to sit on the U.S. District Court in Northern Ohio. 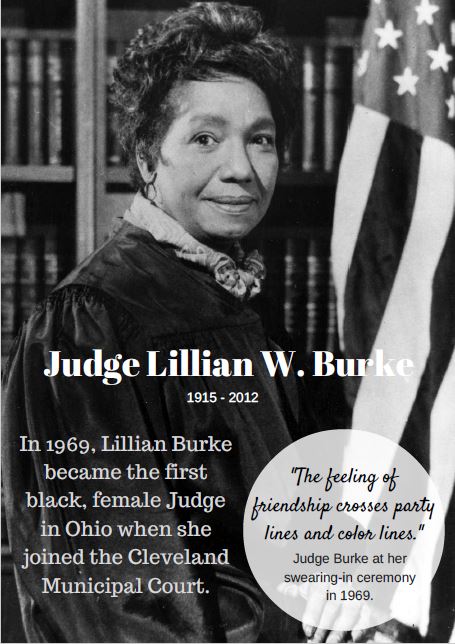