Lloyd Brown overcame hardship and poverty as he sought to practice the law in Ohio. He became the second African-American Justice to serve on the Supreme Court of Ohio, holding office from 1971 to 1973.

Brown was born Dec. 12, 1928 in Little Rock, Ark. to William S. Brown Sr. and Lillie Brown. In 1931, the Brown family moved to Cleveland. A firm believer in the work ethic, William Sr. had Lloyd begin to work at age 5. He gave him five copies of the Call and Post newspaper to sell each week in the Woodland market. When his father died on Sept. 17, 1940 at age 43, the family experienced poverty and hardship. Lillie Brown was forced to move the family into public housing and she worked as a beautician to support her two sons and daughter. To help the family’s finances, Brown worked in the pressroom of the Call and Post and also worked in a shoe store owned by his uncle, Wendell Bishop.

Brown enlisted in the U.S. Coast Guard as a radioman from 1946-1949. Using the educational benefits provided for veterans and supporting himself by working in a potato chip factory, Brown enrolled at Ohio State University where he immersed himself in academic life. Brown graduated in 1955 with three degrees, bachelor’s degrees in political science and law and a juris doctor.

Returning to Cleveland in 1955, Brown began practicing law with Theodore M. Williams. From 1956 to 1957, he moved to the law practice of Cleveland City Councilman Charles V. Carr. He served as assistant attorney general from 1958 to 1959 in the administration of Attorney General William B. Saxbe and, in 1959, he became assistant Cuyahoga County prosecuting attorney, working in that office until 1967.

In 1967, Brown was elected judge of the Cleveland Municipal Court. On Dec. 7, 1971, Gov. John J. Gilligan appointed Brown to the Supreme Court of Ohio. He replaced his friend Justice Robert Duncan, the first African-American to serve on the Supreme Court. Justice Brown ran for election to the Supreme Court in 1972, but Paul W. Brown defeated him. During the election campaign, he remarked that his retention on the Supreme Court would help to show black citizens “they, too, can have a piece of America’s action. You’ve got to show them the system is working.”

In 1972, Brown affirmed the separation of powers in In re Contempt of Common Pleas Court, Probate Division. The judge of the Trumbull County Probate ordered the commissioners to increase the salaries of all probate court employees. When the commissioners refused due to a county budget deficit, the probate judge found them guilty of contempt of court. The commissioners were ordered to pay a $300 fine and to serve a three-day sentence in the county jail. After they served the jail sentence, they were to return to the probate court judge to answer if they would abide by his order. The commissioners appealed. Brown wrote that a more suitable remedy would be for the commissioners and the judge to appear before the impartial tribunal of the court of appeals to present their cases. The judgment was reversed.

Brown was an outspoken foe of racism in the courts. Speaking to the National Bar Association in 1972, he stated that equal protection under the law had not been achieved. “The law is neither black or white. It reflects the background of the men who administer it,” he commented.

Gov. Richard F. Celeste appointed Brown to the Ohio Board of Regents on Nov. 4, 1984. He was serving as secretary of the board when he died in 1993. After leaving the Court, Brown joined the law firm of Weston Hurd Fallon Paisley and Howley as a partner. He practiced law from 1987 to 1993.

Brown was generous with his time and money supporting social service organizations and youth groups. In 1971, he founded a scholarship fund. In 30-plus years of giving, it awarded more than $200,000 to second- and third-year law students at Case Western Reserve University, Cleveland State University and Howard University.

Brown died on May 5, 1993 at age 64, one month short of retirement. His wife, Phyllis, and three children survived him. Elaine Hairston, chancellor of the Ohio Board of Regents, said Brown “cared deeply about Ohio’s colleges and universities, giving years of his life to supporting them and their students in the hope of a better tomorrow.”

In 1984, Governor Dick Celeste appointed Brown to the Ohio Board of Regents, where he served as secretary of the board at his death in 1993. He also was a partner at Weston, Hurd, Fallon, Paisley and Howley from 1987 to 1993.

Brown died one month short of retirement on May 5, 1993. He was survived by his wife, Phyllis Brown and three children 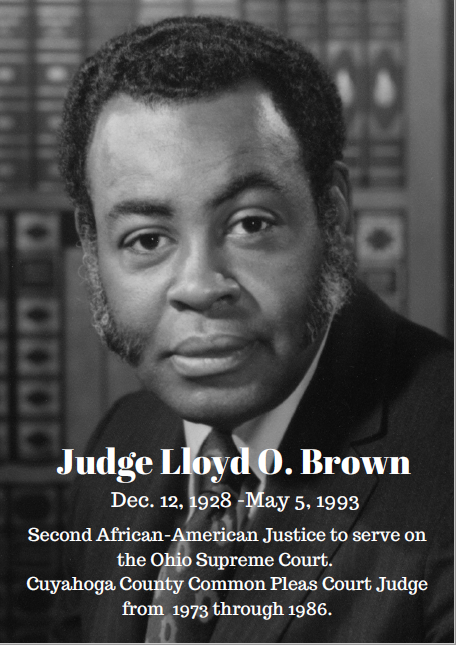