Robert Morton Duncan was a pioneering Ohio jurist who was the first African American to ever serve on the Ohio Supreme Court and who decided the Columbus schools’ historic desegregation cases.

“Justice Duncan was a great man and an exemplary jurist,” said Chief Justice Maureen O’Connor. “He demonstrated in his personal and professional life a deep commitment to the rule of law, and he was an inspiration to a whole generation of Ohio lawyers and judges. On behalf of my colleagues on the Supreme Court and the entire judicial branch, we offer our heartfelt condolences to the Duncan family in this difficult time.”

Born in Urbana, Ohio on August 24, 1927, Duncan frequently commented on his early schooling, noting his education in a desegregated school in a completely segregated community. In 1948, he received his bachelor’s degree from Ohio State University. He earned his law degree in 1952. Graduating as president of his law class, he admitted, “I wasn’t on fire about the law as a law student … I didn’t see myself as having a place in the law. I didn’t know any black lawyers.” He was admitted to the Ohio bar the same year.

From 1952 to 1956, Duncan served in the U.S. Army in Korea. A family acquaintance from Champaign County, William Saxbe, was elected Ohio attorney general. Saxbe asked Duncan to serve as assistant attorney general and it was his experience there that changed Duncan’s views on his role as a lawyer: “I caught fire,” he said. Unfortunately, the political climate in Ohio changed and Saxbe lost the attorney general’s office and most of his staff with it. In Duncan’s next position as an attorney with the Bureau of Workers’ Compensation’s Industrial Commission from 1958 to 1960, his duties included preparing opinions and making recommendations on compensation cases.

In 1960, Duncan was hired by Russell Leach as the assistant city attorney for Columbus, where he tried criminal cases for four years. In 1962, Saxbe won back the Attorney General’s office and, in 1963, Duncan returned to work for him as chief of the workers’ compensation section. When the position of chief counsel opened in 1965, Saxbe moved Duncan into a position supervising 125 assistant attorneys general and directing all legal work for the office. Duncan brought considerable experience with municipal law to the office.

Duncan was elected in 1966 to Franklin County Municipal Court. Gov. James A. Rhodes appointed him to succeed Supreme Court Justice Paul W. Brown in 1969. Duncan subsequently won his seat in the 1970 election. He referred to his term on the Supreme Court as, “A monastic life…conducted mostly away from lawyers and litigants…but as exciting as it is exacting.”

He left the Supreme Court in 1971, when President Richard Nixon appointed him to the U.S. Court of Military Appeals, a three-justice bench created by Congress in 1950, as the highest court for military personnel. It hears appeals of cases originally adjudicated in military tribunals, which are presided over by commissioned officers or military judges. Duncan described himself as a “constitutionalist who believes the law should be applied equally without regard to personality and to meet the challenge of our times.”

Nixon appointed Duncan to the U.S. District Court for southern Ohio in 1974. Over the 11 years Duncan served the court, he identified the Columbus schools’ desegregation cases as the most meaningful cases over which he presided, because he was able to secure equal educational opportunity for all African-Americans (Penick v. Columbus Board of Education, 1977).

As contentious and highly emotional as the school segregation cases were, Duncan said he does not think they were the hardest to decide in his time on the federal bench. In these cases the precedent was well established. Duncan said he believes the most difficult proceeding was a case involving Allied Artists. In that case, the "big name" movie production companies challenged an Ohio law that prohibited "blind bidding," a practice by which theater owners were forced to purchase the license for movies without the opportunity to preview them. The movie production companies argued that this violated their First and Fourteenth Amendment rights. The case had no clearly established precedent and involved a complex analysis of constitutional issues and provisions of the Uniform Commercial Code. Duncan determined the blind-bidding laws did not impose on the constitutional rights of the motion picture companies and ultimately upheld the laws as constitutional.

Duncan ended his judicial career in 1985, when he stepped down from the federal bench to join the private firm of Jones, Day, Reavis and Pogue in Columbus, as administrative partner, as well as firm coordinator for the new associates group. His colleagues in the courts considered him a careful judge, a moderate, striving for “honest advocacy” in his courtroom.

Over the years, he served the Ohio State University in many capacities, as vice president and general counsel, on the board of trustees, and as the Moritz College of Law’s Distinguished Jurist in Residence. In 1985, Duncan won the Distinguished Service Award from the American Civil Liberties Union, honored by Executive Director Benson Wolman as “one of the most impressive persona ever to grace the Columbus scene…as a jurist in the courts of Ohio and the United States, he fairly and justly demonstrated exceptional devotion to securing constitutional guarantees of expression and belief, due process, and equal protection of the laws for all citizens.”

Justice Duncan died in 2012 at the age of 85. Duncan was married to his wife Shirley for 57 years and had three children: Linn, Vincent, and Tracey. 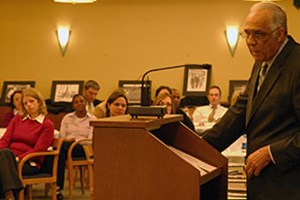