Cuyahoga County Common Pleas Court Judge Brian J. Corrigan has been given the Golden Gavel Award by the Ohio Common Pleas Judges Association at their winter meeting in Columbus. It was presented for his three decades of service to the people of Cuyahoga County.

Judge Corrigan will retire in January after reaching the mandatory age of 70 in which Judges can no longer seek election in Ohio. Judge Corrigan was first elected in November of 1991 and was sworn in on January 13, 1992. He was re-elected to four additional six-year terms, spending his entire career in courtroom 22-A.

“It’s a singularly great honor to be in this position,” says Judge Corrigan. “Anything I’ve done well I can’t full credit for. Any success that I may enjoy is their (the Court employees) success too. We’re lucky that we have the people we have.”

A Cleveland native, Judge Corrigan graduated from St. Ignatius High School and attended the University of Dayton. He received his law degree from the Cleveland-Marshall College of Law and joined the bar in 1984. He practiced law for seven years before running for Judge.

The OCPJA works in accordance with the Ohio Code of Judicial Conduct to improve the law, the legal system, and the administration of justice. The Association conducts two annual conferences in which judges have the opportunity to share experiences and insights through meetings and classes. 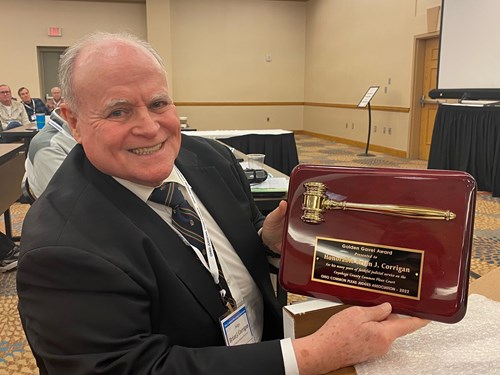