“My father and uncle both served in the Vietnam War and my grandfather served during World War II.  My Bailiff, Tom Lynch, is a Marine Corp veteran. I believe our Court and Community owe a debt of gratitude to all our military service personnel that can never truly be fully repaid,” says Judge Santoli. “It is incumbent upon us to make sure our veterans are getting all the resources and help they need, and I look forward to trying to assist our veterans as the Judge of the Veterans Treatment Court.”

Judge Santoli takes over from Judge John J. Russo, who has presided over VTC since January of 2019, when he took over for the retiring Judge Michael Jackson.

“It has been an honor presiding over this docket, which I did so because my late father was a World War II veteran. I owe so much to the incredible VTC team I have worked with and I wish Judge Santoli all the best,” says Judge Russo.

Both Judge Santoli (below left) and Judge Russo (right) express their appreciation to Judge Jackson, a Vietnam War Marine veteran who was appointed to the docket when it began.

On Tuesday, May 24, the final Veterans Treatment Court graduation under Judge Russo was held. Five veterans completed the program today. Congratulations to the grads!

“My staff and I are very excited about taking over the Veterans Treatment Court docket.  Judge Russo has done an exemplary job with the docket and I hope to expand on his initiatives,” added Judge Santoli.

More than 210 veterans have successfully completed the VTC program and about 55 veterans are currently participating. 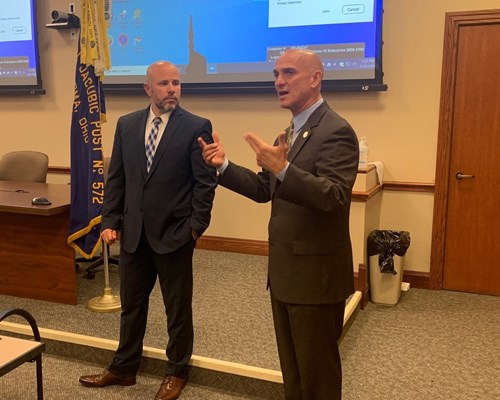