Some students in the Cleveland Metropolitan School District (CMSD) are attending the Stephanie Tubbs Jones School for the first time this year.

The CMSD School Board voted in June to re-name the former Patrick Henry School at 11901 Durant Ave. in honor of the late Common Pleas Court Judge Judge, Cuyahoga County Prosecutor, and U.S. Congresswoman. Tubbs Jones served on our Bench from 1983 to 1991, when she resigned to serve as Prosecutor. Tubbs Jones then served in the U.S. House of Representatives from 1998 until her death in 2008.

According to a news release from the CMSD, Cleveland Councilman Kevin Conwell advocated for the tribute to Tubbs Jones. “Children have to see success every day,” Conwell said. “They will get a chance to see that, to see pictures of her, and aspire to be just like Stephanie Tubbs Jones.”

Three CMSD schools have been given new names, due to a board policy which prohibits naming schools for people who had enslaved others, participated in the oppression of women or other minority groups, or belonged to a supremacist organization. Thomas Jefferson International Newcomers Academy at 3145 W. 46th Street is now the Natividad Pagan International Newcomers Academy and the former Louis Agassiz Elementary School at 3595 Bosworth Road is now the Mary Church Terrell School.

A CMSD work group began meeting in summer of 2021 draft criteria for the names to placed on schools and determine whether any current names needed to be reconsidered. A historian researched the origin of the names of every single school in the District, as well as proposed new names. The District collected feedback and suggestions for new names at community meetings and online. The work group designated schools that it said deserved or should possibly receive additional review. 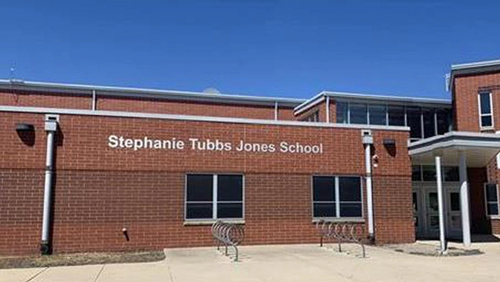