Congratulations to Deputy Chief Probation Officers Stephania Pryor and James Starks, the Court's honorees at the 73rd Annual Franklin A. Polk Public Servants Merit Awards Luncheon, which was held on Friday, September 6th at the Westin Hotel in downtown Cleveland.

"Steph and Jim both started their careers as Probations Officers with the Court in April 1989," says Administrative Judge John J. Russo who nominated the pair.  "Their careers have followed similar paths as they perfected their skills and were promoted to Probation Supervisors and then to Deputy Chief Probation Officers.  Their commitment to the staff and to improving programming for offenders in the ever-changing criminal justice field is recognized by our Judges, stakeholders, and Court personnel, as well as the population they serve each day."

Members of the legal community gather each year to recognize and congratulate the selected court employees for their outstanding dedication and commitment to public service.

City, county, state and federal courts and clerks of courts offices are asked to nominate non-elected employees for their years of outstanding service to the legal profession, the general public, and our justice system. These merit awards are given for long and faithful service, devotion to duty, wise counsel, unfailing patience, and assistance to the public and members of the Bench and Bar of this county.

Jim and Steph were joined by dozens of people of the Court's staff, Probation Department, and their families. 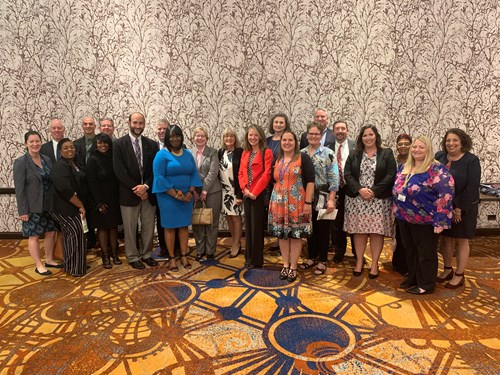