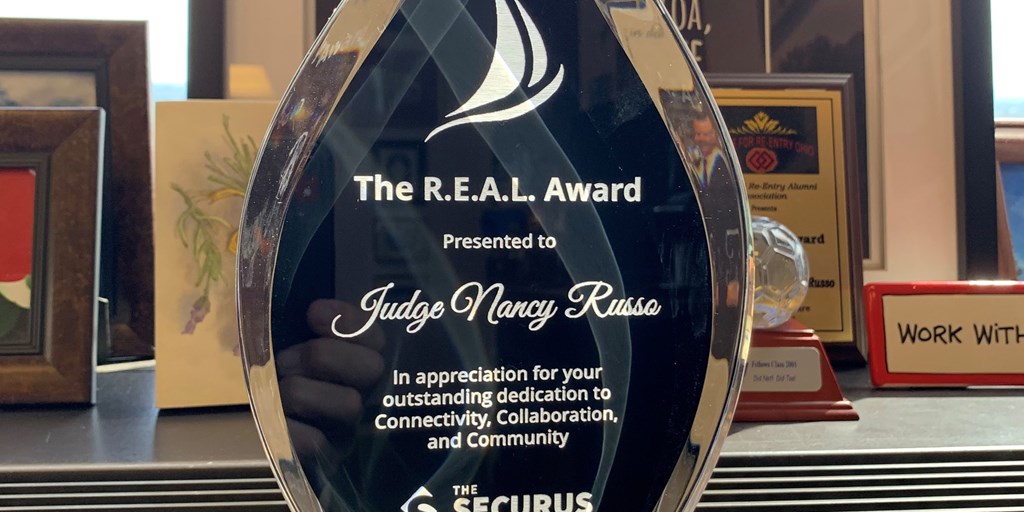 Judge Nancy Margaret Russo was honored at the September 12 "The 3 C's of R.E.A.L." ceremony at the downtown Hilton. R.E.A.L. stands for Reaching community awareness, community Engagement, community Accountability and Leadership

The award was given in appreciation of Judge Russo's outstanding dedication to the three C's of Connectivity, Collaboration and Community. Judge Russo presides over the Court's Re-Entry Court, which allows some prison inmates to get early release with Court supervision.

The ceremony was sponsored by the Securus Foundation, which seeks to connect justice agencies to their communities with technology and processes that provide demonstrable reduction in recidivism.

Judge Russo also spoke at the recent graduation ceremony of the Circle Mountain Program at the Trumbull Correctional Institution.

Circle Mountain is a mindfulness/meditation program that was started by inmates at Trumbull and, through their graduates and persons released from prison, is now a non-profit.

A Re-Entry Court graduate, who took over the program when he was at Trumbull, was instrumental in getting the non profit status registered. That arm of the program is going into inner city schools to teach students calming and meditation techniques.

Judge Russo has also begun a year-long program as a Senior Stokes Scholar through the Cleveland Leadership Institute. Her role will be to mentor/guide the Stokes Scholars and Junior Scholars.  Serving as a Senior Scholar is by invitation only.  Judge Russo has also been named a Legacy Leader through the Cleveland Leadership Institute.