The Cuyahoga County Common Pleas Recovery Court and the Greater Cleveland Drug Court hosted a combined graduation ceremony at the Rock and Roll Hall of Fame and Museum on Wednesday, October 20.

While COVID-19 protocols required that many of the guests attend remotely, the graduates themselves were able to spend time touring the Rock Hall less than two weeks before the 2021 Induction Ceremony is held in Cleveland.

“We are so thankful to the Rock Hall for providing this opportunity to our graduates,” says Recovery Court Judge Joan C. Synenberg. “They have worked so hard to achieve this goal, and being at the Rock Hall will make it even more special.”

The ceremony featured seven graduates of Recovery Court, and 13 graduates of Judge Lauren C. Moore’s Drug Court, which is part of the Cleveland Municipal Court. Both dockets assist clients in overcoming addiction issues that may have contributed to their becoming involved in criminal activity. Recovery Court, which handles felony-level charges, also treats the underlying mental health issues related to trauma.

“I am always so proud of our graduates,” says Judge Moore, who presides over misdemeanor cases. “I tell them that “they rock,” so the Rock Hall is a perfect location for us to celebrate their completing the program.”

The Greater Cleveland Drug Court was established in 1998 under Judge Larry A. Jones, who presided over the docket until 2008 when he was elected to the Eighth District Court of Appeals. Judge Jones’s recent, unexpected passing was felt by those in attendance at the ceremony.

Recovery Court began in January of 2015 with the appointment of Judge Synenberg, and is one of three dockets in the Cuyahoga County Common Pleas Drug Court. 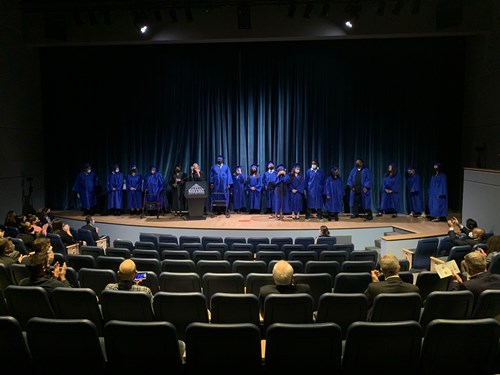